Symptoms of a Herniated Disc in Vienna

Symptoms of a herniated disc vary from person to person. Some of the most common symptoms are lower back pain (the pain may be sharp, or it may be aching and constant), and sciatic nerve pain that typically only occurs down one leg.

Causes of a Herniated Disc

In between each of the vertebrae in the spine are discs that act as cushions. These discs are filled with a soft, jelly-like material that protects the vertebrae as your spine moves. When these discs become compressed, it's possible for the jelly-like material to leak out of the tough exterior of the disc. This condition is known as a herniated disc. There are many different ways this can happen. Over time, discs naturally degenerate and become more susceptible to damage. Some people get herniated discs as a part of the aging process. Others acquire a herniated disc injury by lifting a weight that is too heavy with improper form. Repetitive motion, such as loading and unloading boxes as a part of daily work, can also result in a herniated disc. Being overweight or obese also make a herniated disc more likely, as extra weight puts extra pressure on the discs in the spine.

How Chiropractic Treatment Can Help

Often, a misaligned spine goes hand in hand with herniated discs. When the spine is out of alignment, it can put pressure on a herniated disc, which can increase pressure on nerves, causing pain. A chiropractor is able to realign the spine, relieving some of the pressure on the nerves surrounding the herniated disc. Realigning the spine also allows the disc to begin to heal. At your first appointment, our chiropractor will talk with you about how you may have developed your herniated disc, and the symptoms you've been experiencing. Together, you'll develop a care plan that makes sense for you. Typically, herniated discs are treated with a number of different chiropractic treatments, including spinal adjustment, massage, and lifestyle change.

If you think you may have a herniated disc, it's important to get treatment sooner rather than later. Delaying treatment can cause a worsening of symptoms and lengthen healing time. Call our Vienna chiropractor at Pure Chiropractic at (703) 319-1212 to schedule your appointment today. 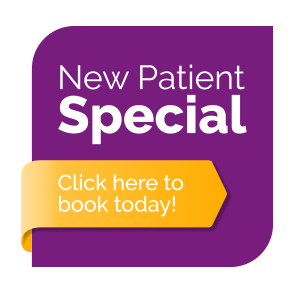